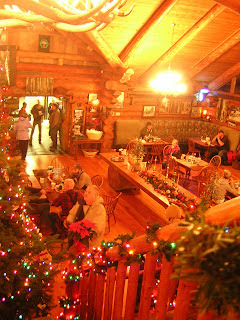 Where do I begin?
The last few days have been wild.

Thursday we(Precious, Mr.Man, Ivy Dog and I) went to Portland to deliver some art.
On the the way home the rain was coming down harder than I have ever seen. With about 20 miles left to the coast we were stopped. The highway was closed because of downed trees. It was about 3pm. After an hour sitting on the road without moving I drove up the wrong side of the highway past the line of other cars to Camp 18. It was only about 1/4 of a mile. Only about 20 others had thought of doing the same thing.

Camp 18 is a restaurant, 18 miles from the coast. It was built 20 years ago to resemble a logging camp. It's very cool. Large, well built, big fire place, bar, food, all the necessities. Once there we learned that power was out all over Oregon and Washington. The Camp has its own generator.
We kept hearing conflicting reports about how long we would be stuck. While we were there trees had fallen behind us as well so we could not go back to Portland either.

Mr. Man and I spent most of the night under a table in the loft with an other family with two girls. 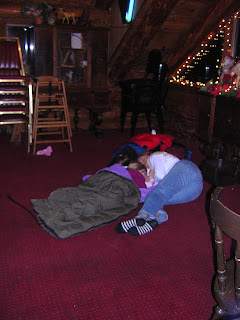 The woman was on her way to Cannon Beach for her wedding. I'm not sure she made it. 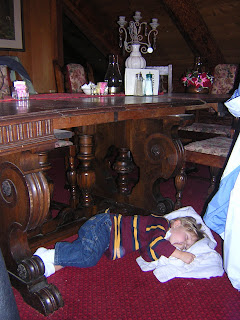 Mr. Man played most of the evening with the two girls which was a huge help. He could not figure out why we could not go home. He kept asking to leave. Precious did not want to leave Ivy Dog in the car all night so she spent most of the night in the car. Around 4am we traded.

At about 10am Friday morning a guy came in saying he had just cut a path in the highway between Jewel and Astoria. Anyone who wanted to follow him could most likely get to the coast that way. Most of us jumped at the chance. Highway 26 was going to be blocked for sometime. Up to 100 trees were reported down.

Camp 18 is the greatest for letting all of us stay and feeding us. They were life savers. We met some very nice people while there. It could have been much worse.

Along the drive we saw this heard of elk. About 200 head. This only part of it. I had to stop. The rest of the cars drove off. The storm was coming back and the winds were getting stronger. 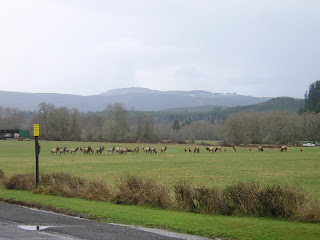 Just up the road from the elk I slowed as this tree was coming down. I'm, glad I had stopped for the elk. The power pole on the left was bouncing up and down about to break. I drove under it anyway. I wanted to get home. 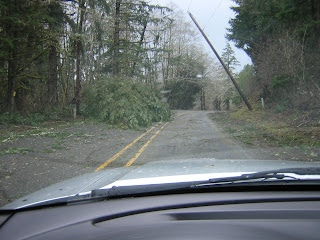 We finally made it home around 1pm Friday. To no power. About 1 million people across Oregon and Washington were without power. The radio was saying it would be Sunday or Monday at the earliest to get it back on.

Thank God, it came back on at 5:45pm Saturday. On the up side we are well stocked with fire wood, canned goods, water and other survival stuff. It was quite the adventure.

This tree was just down the road from our house. I can't believe it missed this coffee hut. How lucky was that? 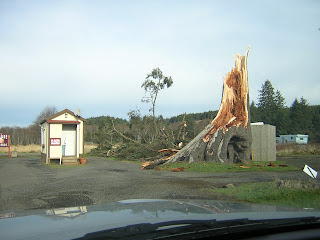 Anyway, everything looks to be back to normal. At least for awhile. We're home. Safe. Our power is back. Our phones are working again. I have access to the outside world again. It's time for a Martini!
Email Post
Labels: Family Rain Snow

Anonymous said…
Wow! That's quite a tale -- we had it cushy by comparison!! One thing I'll say for the Pac. NW, people are generally a really nice bunch of folks. It warms my heart to hear what Camp 18 did, but I can't say it surprises me. Which I think is the best of all reasons to live in this region. So glad you're safely home, and reconnected to the outside world!

P.S. The commenting difficulty apparently has something to do with Blogger/Beta itself. Their interface with Blogger is failing somehow, I think. I've noticed others having trouble on Beta blogs now, too, so I think it's not just me. For what it's worth.
17/12/06 10:43 AM

Mad William said…
Thanks Eclectic.
Never a dull moment up here in the north west.
Camp 18 is my new favorite place.

Strange about blogger/beta. I seem to be about the only one who never has trouble(knock on wood)
I have been looking at other hosts just in case.
17/12/06 1:24 PM