Where Have All The Fact Checkers Gone?

Have you seen the headline yet? 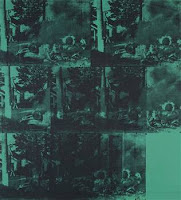 If only it were true. Yes, a Warhol work did sell for $71 million. However, it was not a painting, it was a print!

I know, this may not seem like a big deal, but it really is. It's this kind of half assed reporting that perpetuates the stupidity of the general public.

I have spent a huge portion of the last 20 years trying to educate people about fine art. One of the most misunderstood things I have ever come across are prints. A print can be quite valuable, but they are not unique works. Prints are almost always done in multiples. That's where people get confused. They seem to think that because there is more than one printed, that they are not ever going to be worth anything.

Well thank you very much to the Associated Press. You Fugged it up!

The Warhol work in question, "Green car crash" that was screen printed on a green background. How hard is it to check your facts? You called it a painting about a dozen times. You did however get right in the caption under the photo where you called it a silkscreen. A silkscreen by definition is a print. Not a painting.

It's no wonder so many people are totally confused about art when the major news companies can't get it right. They trust you clowns to be accurate.

I don't think anyone knows exactly how many of these car crash images were even printed. Possibly hundreds. It is not even close to being a "painting".

It was fantastic that some person with way too much money spent $71 mil on this work. It's good for the art world. It's good for the economy in general. But the next time some John Q Public, that has read this story, comes into my gallery and tells me that prints are crap, only paintings are valuable. I can't even tell him about this sale because they will never believe me over the "News".

Even though I'm right.

Before you email me about typos, Don't. This post is about the facts not the typos. Typos have nothing to do with fact checking, they are more in lines of editing. For what it's worth, I have neither.
Email Post
Labels: Art Business Downfall of Humanity News

Iron Fist said…
I'm with you on this one. Journalists are idiots who can't be troubled to check the least thing that they report.